Marmande (in Occitan, Marmanda) is a commune in the Lot-et-Garonne département in south-western France.

Marmande is located 35 km north-west of Agen, on the southern railway from Bordeaux to Sète. The town is situated at the confluence of the Trec with the Garonne on the right bank of the latter river, which is crossed at this point by a suspension bridge. There is a second bridge to the west of Marmande which connects the D933 from the Toulouse/Bordeaux motorway (A62) to the new by-pass, opened in July 2009, which now leads to Bergerac and the département of the Dordogne. Marmande ranks 481st in terms of population for the whole of France. A noted producer of tomatoes, a festival dedicated to tomatoes is held annually in July. 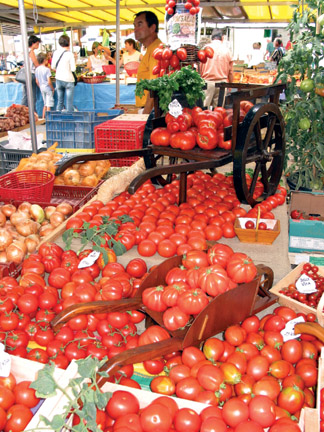 Marmande was a bastide founded about 1195 on the site of a more ancient town by Richard Cœur de Lion, who granted it a liberal measure of self-government. Its position on the banks of the Garonne made it an important place of toll. It soon passed into the hands of the counts of Toulouse, and was three times besieged and taken during the Albigensian Crusade, its capture by Amaury de Montfort in 1219 being followed by a massacre of the inhabitants. It was united to the French crown under Louis IX. A short occupation by the English in 1447, an unsuccessful siege by Henry IV in 1577 and its resistance of a month to a division of Wellington's army in 1814, are some important events in its subsequent history.

Apart from the administrative offices, the most notable building is the church of Notre-Dame, which dates from the 13th, 14th and 15th centuries. The windows of the nave, the altarpiece of the 18th century and, in particular, the Renaissance cloister adjoining the south side, are some of its most interesting features.